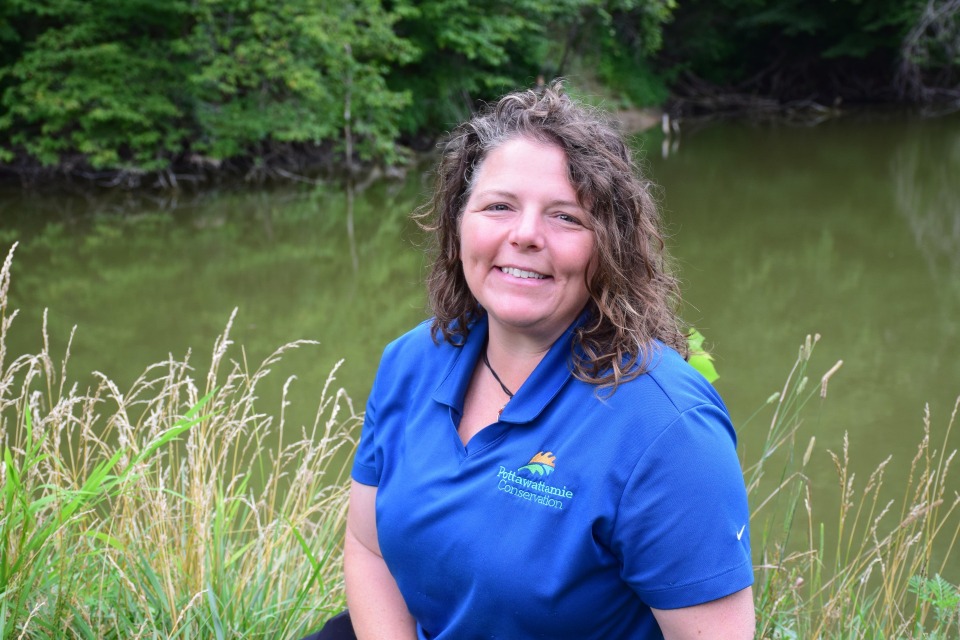 Rene Stroud received a Bachelor of Animal Ecology from Iowa State University. Rene has a wide variety of prior experience including providing environmental education to the citizens of Sac County, Iowa from 2005-2014. Some of her other experiences include banding birds in Texas, providing environmental education at Custer State Park, and interning at Neil Smith Wildlife Refuge.

Rene and her husband, Marty spend their time watching their daughter, June grow and rediscovering the joys of the outdoors together.

Posted on 12/18/2020
by Rene Stroud, Naturalist
Follow Rene as she spends a morning on the trail of a coyote.

The great thing about the morning after a snow fall is that the activities of nocturnal and crepuscular (dawn and dusk) animals are written on the ground, that is, if you can finish reading their stories before the sun erases the evidence of their excursions. Animal tracking is a fun activity that combines science & observation turning you into a nature detective.

On this walk I spotted a set of tracks traveling along the Fox Run Ridge trail at Hitchcock Nature Center before veering off on another path. I have seen fox, coyote and domestic dog tracks before, so I used my past experience and certain features to decipher that this was coyote. 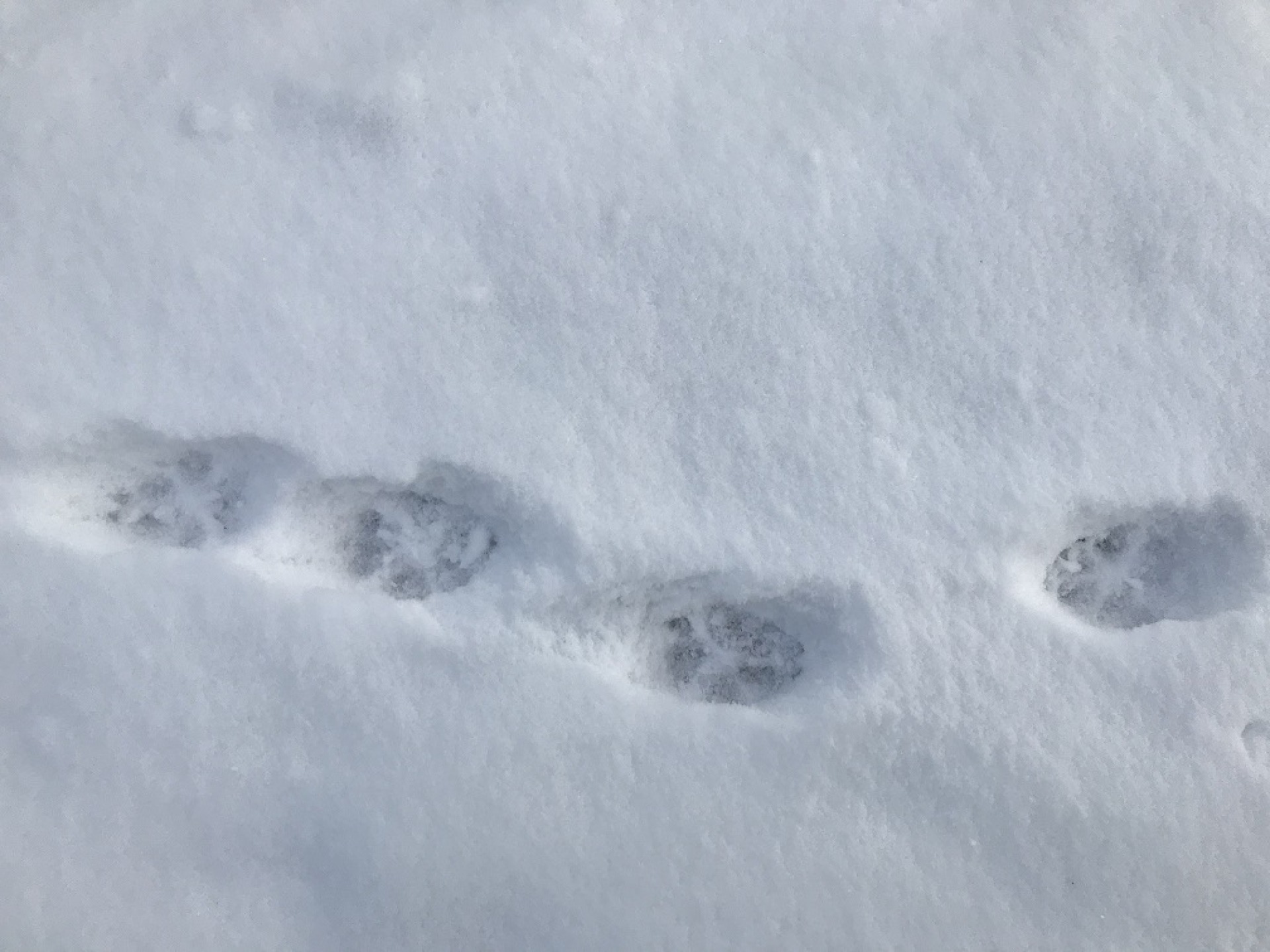 I knew the track was that of a canine since each paw print included claw marks and the symmetrical, oval shaped foot had a heal pad with three distinct lobes. Using the relative size of the track, the gate (distance of the step for one foot) and tight toe and pad pattern, I determined that the track didn't belong to a fox. 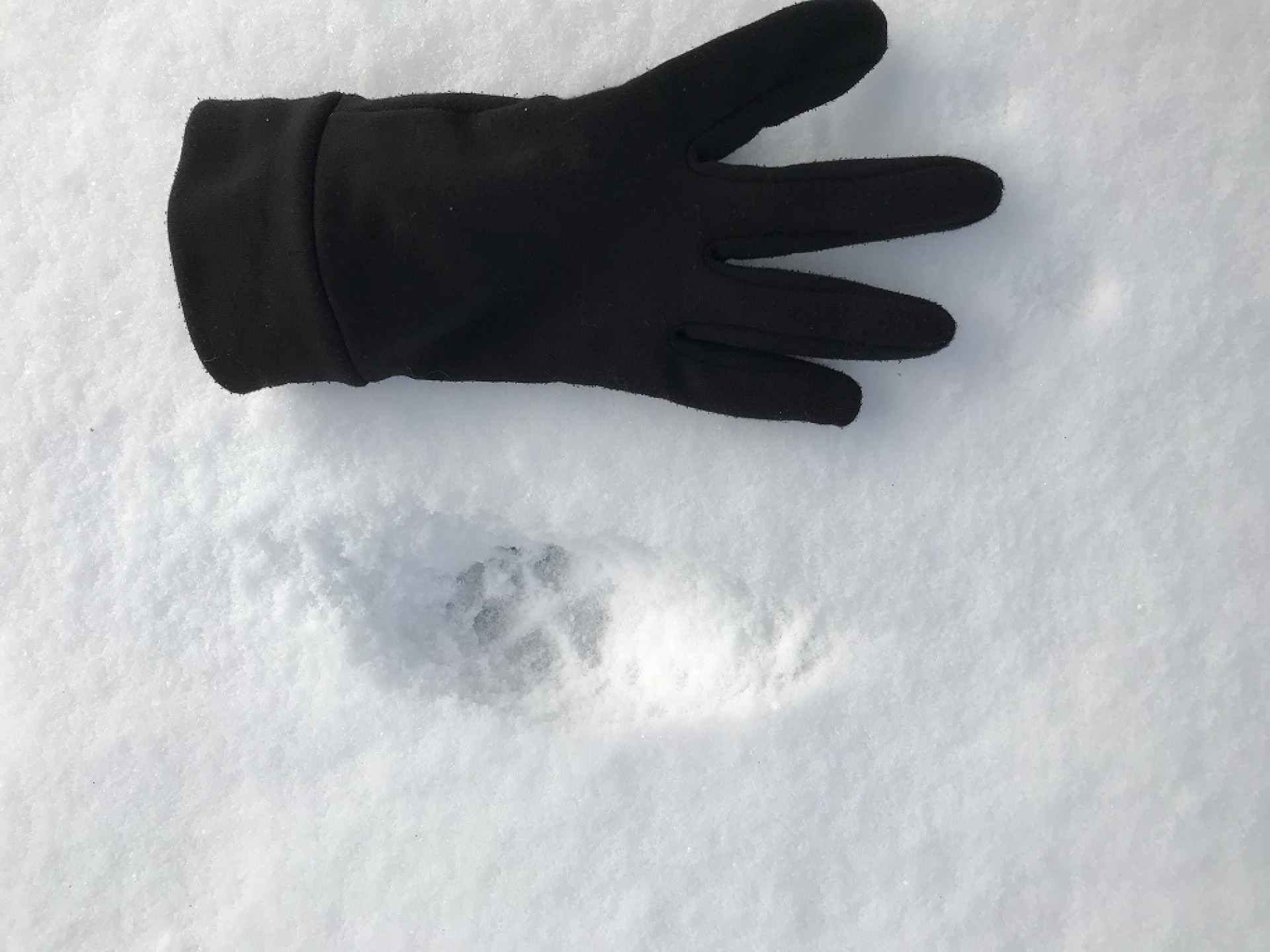 This track pattern had perfect step which means that the hind foot lands in the same spot as the front foot, creating an illusion that it was made by a two-legged creature which is a behavior practiced by wild canines to save energy and aid in survival. This told me these tracks belonged to a coyote. Domestic dogs don’t have to worry where their next meal comes from and don’t need to save on energy, so they often walk sloppily and all four feet are usually be seen.

Following the tracks I wondered what this coyote was up to last night? As I walked up Fox Ridge Run I noticed that the coyote originally came off the nearby ridgetop & up along the left edge of the trail. Now I had a trail of footprints going in two directions. Were these two different coyotes or one that turned around? 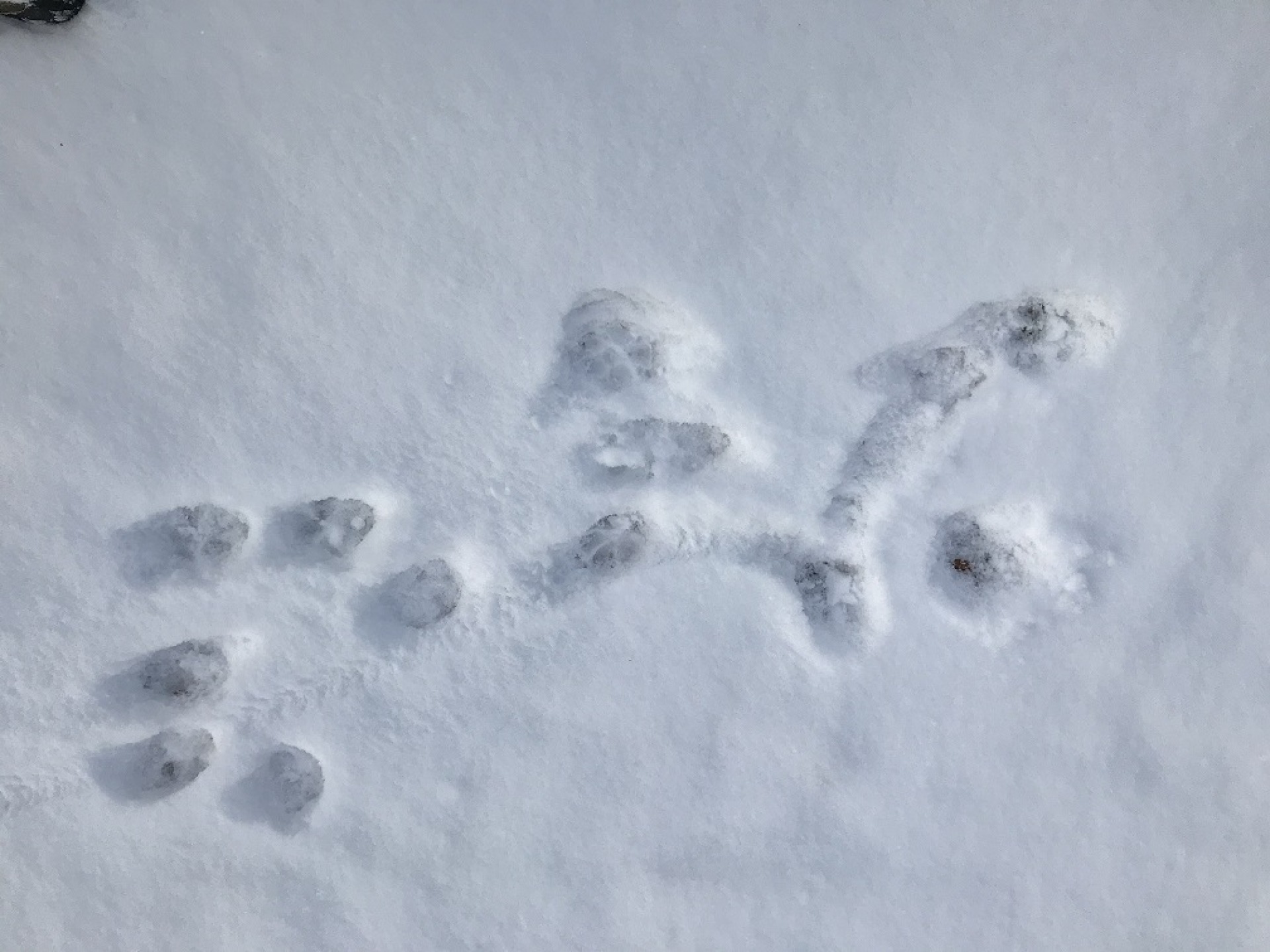 I followed the dueling foot prints up until they suddenly stopped and turned around. Continuing my investigations I turned about and followed the tracks back down the hill. The tracks show that the animals stopped for a moment to focus on something on the left side of the trail but after this brief inspection the animal veered & headed down the hill toward the Dozer Cut Trail, bypassing the stairs that we humans normally use.

Here the coyote’s gate widened indicating the coyote was now taking longer strides, hastening the pace but not running.  Continuing on I come upon a cluster of footprints and scat belonging to animal. After this brief "pause" the coyote picked up the pace and continues down Dozer Cut. Then just before Dozer Cut loops back to rejoin Fox Run Ridge our friend leaves the trail & heads off into the trees to the left of the trail. 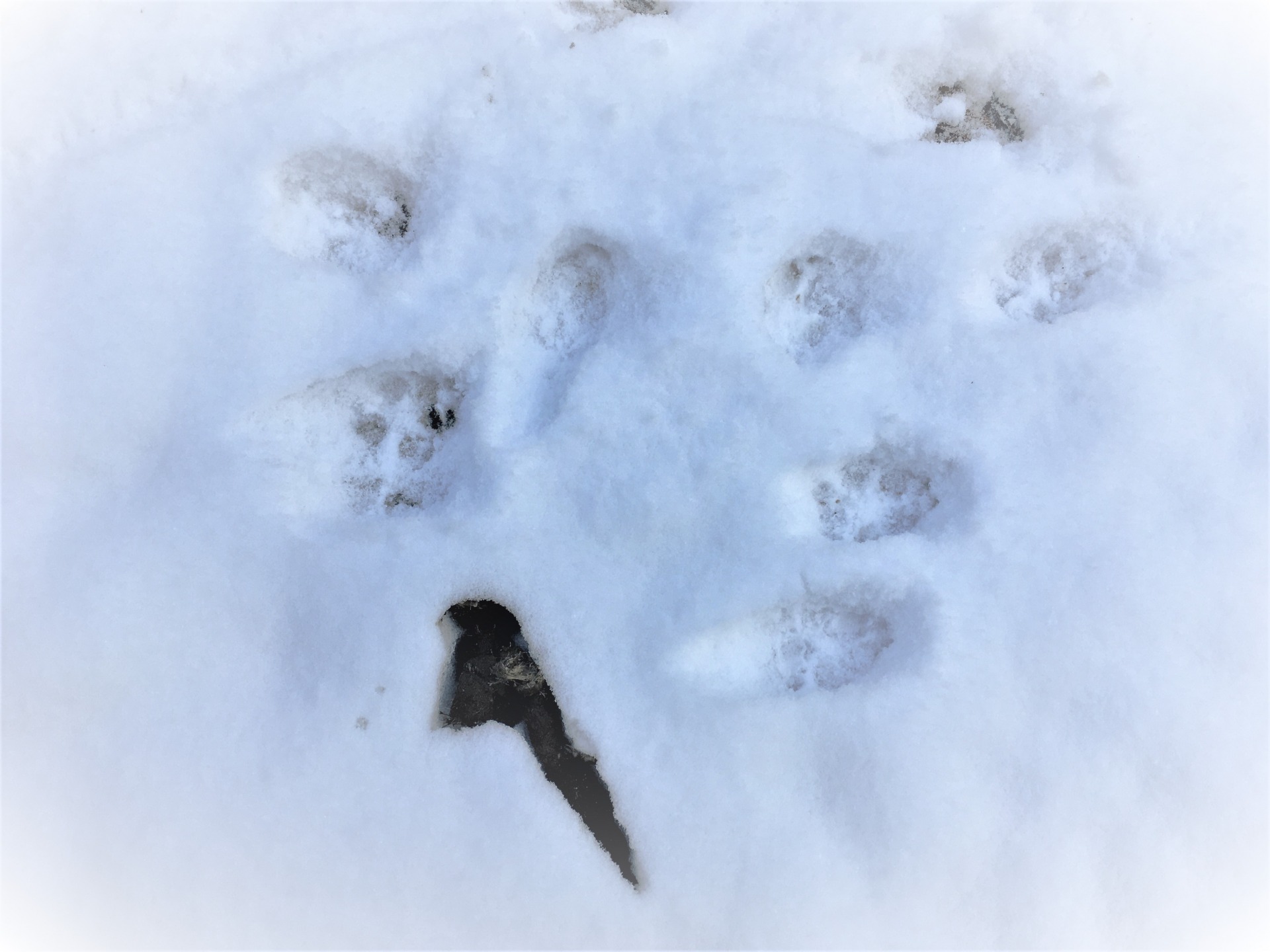 I venture off trail to follow, wondering why our friend left the trail here. In the off trail terrain the tracks are less defined in the soft surface of snow-covered leaves. I followed our friends tracks around the bend of the ridge until they descended down the hill almost straight down. As much as I wanted to follow, there is no way I could make it down that hill and stay on my feet plus I had a blog to write!